Renovation and restoration of the family tombstones

This page is machine translated. Our human translators will soon get to it.
You're invited to contribute your own translation, using our SideLang tools.

Description The event was covered in the local press . One of the articles published in the newspaper “Fränkischer Tag” (25.06.2013) by journalist Beate Dahinten titled “Treatment tombstones in the Jewish cemetery ” (Grabpflege auf dem jüdischen Friedhof) and translated :
” Memory of the ancestors of Jacob Hecht very important to him . Many times he visited the Jewish cemetery on Ermershausen . Especially this time he came to the area Hassberge ) ) to see the renovation, the tombstones , he initiated.
” My father never talked about it,” Hecht said , referring to the history of his family. Only after the death of his father , who came from the village ( Maroldsweisach ) , started us deal with especially with the Internet. He even wrote a book about “Eight generations of the Hecht family .”
Yaacov Hecht was the first time in Germany 25 years ago delegations of the Government of Israel , and later visit Germany privately with family members. He has good relations with the mayor ( Maroldsweisachs ) Former Ottomar Welz . And of course with Cordula Kappner investigated a lot about the history of Jews in the area including the Hecht family . Hecht came time to visit with his son Joel and his grandchildren Daniel and Roy . Daniel adolescent , it was the first visit he found it exciting .
Regular visits Regelmäßige Besuche ) ) Hecht grandfather came to visit the graves of their ancestors in the cemetery every two or three years , although he did not recognize them . Or perhaps because , it says a lot about him that he is not forgotten and understandable , so that six tombstones of the carefully restored Hecht.
Yaacov Hecht grandfather almost 78, the tester along with Andreas Vogt and mayor William Schneider addresses the tombstones . Andreas Vogt talks about the challenges he had this job . From using special tools , as worn tombstones filled with many layers of moss required sensitivity to the work done without the use of chemicals.

Would have to disclose the letters and decorations and to ensure the existence flawless . Hmsftz Vogt agreed with Hecht . Tombstones should not eventually show news too, so gravestones remain as they were only the addition of the necessary repairs .
Buried in the cemetery , among other things Hecht ‘s grandfather and great-grandfather Aaron. Both were traders . The family lived on the street percentage of men ( ( Heutigen Herrenstraße No. 30 . Village restored them C”hhctim underwear “(” untere Hecht “). Yaacov Hecht was born in Berlin in 1935 , his father teacher who acquired his education at the Jewish Würzburg ( Würzburg ) . Conclusion of his studies was a teacher at a Jewish school in Mainz ( Mainz ) then moved to Berlin as a teacher and at the outbreak of the Holocaust ( Pogrom ) family lives Palestine ( Palästina ) .
While the others could not escape from the Nazis : The grandparents on the mother of Jacob Hecht , who came from Mainz , were jailed in 1942 in the ghetto and taken away two years later to Auschwitz . Therefore, visited Jacob Hecht and his family also Theresienstadt concentration camp .
Hecht family from Jerusalem came especially to see the restored tombstones in the cemetery at Ermershausen . Although the visit was short , Hecht says , but he was ” very important to me ” (Für mich ist das sehr wichtig “”) “.
For example an article published on 24.06.2013 in the newspaper “ERSCHIENEN IN DER NEUEN PRESSE COBURG”: 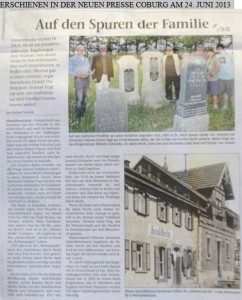