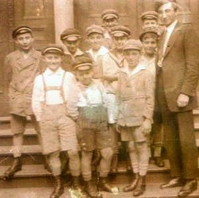 there he was awarded his teaching diploma in 1921. The town Wurzburg2 is the district capital of Lower Franconia, where the village is located, and it was therefore possible to obtain documents related to the family history from the city archives. In 1923, after completing his studies, Grandfather Samuel moved to Mainz. In Mainz he taught in the Jewish school “Bondi Schula”3 (see photo).

In 1929 he married his pupil Esther (Elza) Klein who was 10 years his junior (born 1911). My elder sister, Miriam, was born in Mainz in 1932. According to Itzhak Kali (formerly Klein) Esther’s brother (who is today a resident of Beit Meir, near Jerusalem) the history of Esther Hecht’s maiden name, Klein, is documented since 1650. The Klein family name was officially registered in 1670.

Grandmother Esther’s great grandfather and great grandmother (in the photo she is in her twenties) are Josef and Hedwig Klein (née Heumann). Josef Klein was born in 27.12.1880 in Wurzburg, Urspringen, Bavaria, to Yitzhak and Esther. This is the city where Grandfather Samuel had studied and where his wife, Heda, was born in 31.10.1889 (see photo of Josef and (Hedwig) Heda Klein in the 30s). Josef Klein was a shoe merchant and during the Second World War was appointed as manager of the old Jewish people’s home in his town Mainz.

The Klein family was deported during the Nazi regime to the city Darmstadt. From there the family was sent in “transport number XVII/I 578” in 28.9.1942 to the Tereizinstadt concentration camp in Czechoslovakia. In 19.10.1944 the Klein family was sent in Transport number Es 134 to Auschwitz and was exterminated there near the end of the war. This information was provided in 30.11.1955 by the son Yitzhak Klein (in the photo Yitzhak is seen as a boy in Mainz) and included in the Yad Vashem (The Holocaust Martyrs’ and Heroes’ Remembrance Authority) “Pages of Testimony” (Dafei-Ad) archive. As to the Samuel and Esther Hecht family: it moved to Berlin in 1932. The author of this manuscript was born in 1935 in Berlin

and his first 3 years were spent there. His birth certificate (as early as 1936) was stamped with the swastika insignia (see photo).

The Hecht family lived in those days in Wullenweberstr number 12. Years later, the original house was demolished and a new house built in its place. A monument commemorating (in Hebrew) the “Adass Jisroel” congregation was built in 1998, not far from the house, in the intersection of Siegmunds Hof and Schleswiger Ufer.

In 1938, when all the “Adass Jisroel” schools and synagogues were closed down, by Nazi decree, the Hecht family left Germany and came to Israel (Palestine in

those days) using a British Mandate entry and work permit issued in Grandfather Samuel’s name, as a physical education teacher. The passage to Palestine was made through Trieste, Italy, and then by boat to Haifa (photo of the Samuel Hecht family in 1937). Upon their arrival in Israel the family lived in Neve Shaanan near Haifa. Grandfather Samuel taught in Haifa in the “Netzach Israel” school (in hadar Hakarmel). To make ends meet, in those days, the family also provided care as a foster family to children from the “Youth Aliyah ” initiative (Ali’yat Ha’noar)4 and also to “Teheran children”5

In 1942, by request of the Youth Aliyah Department, in the aftermath of the bombings of Haifa and its refineries by Italian war planes, the family moved to Neve Yaakov (A Jewish settlement near Ramallah). Neve Yaakov of the British Mandatory Palestine fell into the Jordanians’ hands during the War of Independence (1948), together with the adjacent Atarot settlement. These settlements were utterly destroyed. Only after the Six Days War, with the Israeli re-occupation of these two settlements, the region was rebuilt and became a part of the greater Jerusalem area. In 1944 the

Hecht family left Neve Yacov and moved to Katamon a quarter similar to Talbie, where the non-Jewish aristocracy of Jerusalem resided. In Katamon, grandpa Samuel rented a two-storey house which had a grove and a garden with several small farm animals, and which was used as a children’s home throughout the year, and in the summer, was converted into a summer camp for the spoiled bourgeois children of Tel Aviv. Prior to the Declaration of the State of Israel (hach’razat ha’atzmaut) and with the increase in tension in the city, the house served as a dissident arms repository (slik) as well as a place of refuge for the Jewish “Hagana” forces, They stood watch against the Arab gangs who used to roam the streets of Katamon, before it was abandoned by the Jews. The names of many of the Hagana6 soldiers who stayed in our house were later inscribed in the annales of Israeli history, a few of them. The Lamed Hey: (the thirty five soldiers who were killed in an attempt to bring aid to the Gush Etzion region and have become legendary heroes in the history of Israel’s war of Independence (15.1.1948). The name Eliakim Ha’eztni is also held in fond memory: he never parted with his violin during his stay in our house. Only after katamon was re-occupied and populated with evacuees of the old city, it became a Jewish quarter.

At the end of 1947 our family left katamon (as instructed by the Hagana headquarters) and moved to Beit Churi, in the vicinity of Machane Shneler in the Makor Baruch Quarter. We paid the steep sum of 1,000 pound sterling as “Key Money7 ” practices were widely used from the Turkish rule till the 1970’s.))” (dmei mafteach) for an apartment in a luxurious house which used to belong to a Christian-Arab family. The “Hecht children’s home” was closed down Grandpa Shmuel was out of work. The author of this manuscript was forced to sell the family home utensils and used equipment to the merchants in the machane ye’huda market to make ends meet. Grandma Esther worked in the Shaarei Tzedek hospital’s kitchen. Finally, in 1950, Grandpa Samuel was offered a job as a teacher in the Mizrachi Talmud Tora school”, managed by Chanina Mizrachi (in the photo, sitting in the first row, second on the left, is grandfather Samuel, and Mizrachi by his side. Dr. Bula is fifth on the right (left?)). From there Grandpa Samuel went on to teach in the “Shilo” Talmud Tora School. The family has spent the days of the siege in Jerusalem in our house in Makor Baruch, and my Bar Mitzva ceremony was celebrated there as well. On the Shabbat I was called to deliver my “d’var torah” (aliti le’tora) in the Yeshurun Synagogue and while our house was filled with guests) our house suffered a direct hit of four mortar shells aimed at the olive grove near our house where a 120 mm Israeli mortar battery was stashed and was probably spotted by the Jordanians).

In 1953 the family has acquired a small house in the Beit Vagan quarter, where Matanya was born and where he spent his childhood and his youth. The house was sold in 2004. In Bayit Vagan he established the “Neve Etzion” school. Grandpa Samuel died in 1974. Savta d Hecht died 2003 and was put to rest in the family plot in har ha’zeitim (managed by Chevra Kadisha of the Perushim , The Jewish Funeral Society). In this plot, Samuel and Esther Hecht Klein are buried. Miriam whose temporary grave was in “Sheikh Bader” near the supreme court in Jerusalem was moved to Har ha-Zeitim, the cemetery on the Mount of Olives in the 60s. The family house in Bayit vegan was sold after Grandmother (savta) had passed away (2003).

A photo taken in 2002 shows great grandmother Hecht, fifth generation descendant of the Hecht family, and her two great grandchildren, Leor and Asaf (eighth generation descendant of the Hecht family).
Yitzhak Kelly, their son, brother to our grandmother Esther, (made aliyah) already in 1939. His wife Esther (Erika) who was Grandpa Samuel’s pupil (1927) came to Israel in 11.9.1938. Josef and Hedwig Klein, parents to Yitzhak Kelly and Esther (née Hecht) chose to stay with the old people who were their responsibility, in Mainz, and for this they paid with their life.

1. Miriam, born 1932) died (while working as an apprentice nurse) during the polio epidemic in 1950 (buried in har ha’zeitim). Her oil painting portrait was donated in memoriam to the sha’arei Tsedek hospital in 2004. It is located in the third floor of “The Shaare Zedek School of Nursing”. The painting used to hang in the Hecht’s house in Bayit Vegan, in the living room). It was painted by Yehuda Bacon8, a survivor of the Tereizinstadt concentration camp, where many of the Hecht’s and the Klein’s have perished (Klein is the maiden name of Esther Hecht fifth generation descendant of the Hecht family). Yehuda Bacon was a teacher in the Bezalel Art Academy, and Miriam was one of his pupils.
2. Yacov, born 1935, married to Yaffa (née Somach, born 26.11.1936)