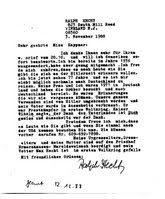 Allan (Aaron) Hecht was named after great grandfather Aaron Hecht (and shares the same generation level with Matanya and Yacov Hecht). The family connection to Allan was first discovered during the family heritage journey in the summer of 2001. Yacov, Yoel, Yifat and Leor took part in this Journey. In a meeting with Cordula Kappner, the retired chief librarian of a Haßfurt School, she provided the family with documents which contained relevant information on the family’s history. One of these letters, written by Rudolf Hecht from New Jersey, suggested the possibility that the Israeli Hecht’s might have relatives in the US. The letter carried the following address: 823 South Mill Road Vineland NJ 08360 and a telephone number (609-692-7898) (see photo of the original letter and a short summary written by Cordula Kappner).
In the letter, Rudolf Hecht writes of the terrible injustice done to Max Hecht himself and to and his cousin Max Hecht, both fought in the First World War.

The younger Max Hecht died the death of a hero. Hitler “rewarded” them by the “Incineration” (verbrannt) 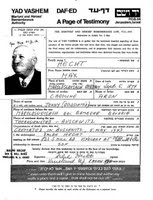 of Rudolf’s father, Max Hecht, in Auschwitz (in the photo, the original document, compiled in 8.3.1974 by Rudolf Hecht as a “page of testimony” (Daf-ad). The document is stored in the Yad Vashem (The Holocaust Martyrs’ and Heroes’ Remembrance Authority) archives. Another, more detailed “Daf-ad” document was written by his grandchild a few years later.
The attempts to reach Rudolf Hecht by phone have failed (he should have been 90 years old at the time). Additional attempts were made by Matanya Hecht and by my self to locate unknown family members through the active online “genforum”, but all were in vain. (URL)?

One day, in 27.11.2004, while using the Google search engine, the “Genealogy Germany, Bavaria” website was discovered. The website is no longer active, but it is still online. Among twenty other requests for the location of (non-Jewish) relatives, the following request appeared:

“HECHT – my father’s name was Rudolf HECHT. My grandfather’s name was Max HECHT. They came from a small town named Maroldsweisach, near Bamberg. Any help would be greatly appreciated. [email protected] 17 Feb 1998”
The extra “I” inserted by mistake into the username, made it impossible to contact the sender. All messages sent to that address were returned. After realizing what was wrong with this address, another email was sent on November 27 2004 at 16:19. This time the message got through. It contained the following message:
My name is Yacov Hecht. Your father Rudolf (Ralph) and my father Sally
(Samuel) are cousins!!! We have the same grand father Aaron. Your uncle was Justin we are relatives!!!
Yacov Hecht.
The answer followed quickly, and was received in 27.11.2004 at 21:09. The entire correspondence is included here

27.11.2004-21:09
I just want to let you know who I am, I am Allan named after my fathers (Rudolph) grandfather Aaron, by the way that is my Hebrew name, are you related to the Blooms. I did not know another Hecht really existed from my fathers’ side. Any info you can give me would be greatly appreciated, by the way I am 63 years old. Where do you fit in, from whose side are you? Also how did you get my email address? Thank you for your information. Where are you? Were you part of the Freudenbergers,or Max Hecht. Please correspond.

Once again please stay in touch

I went to Maroldsweisach about 20 years ago. There are NO Jews left, The burgermiester took us around, and he said there is where a Jew Bloom lived etc.I went to the cemetery where my Grandmother was buried, Kissinger’s mother was buried there also. I would also like to update the lineage of Ralph and Justin Hecht. Tell me what you need, for the family tree. Again, thank you,
Allan

29.11.2004-01:22
I am so sorry for being a pain in the neck, I have never heard about you, the last time we were in Israel about 15 years ago, we stopped by the Blooms House, I think they lived in Haifa. How old are you. Thank you for keeping the Hecht family name alive

29.11.2004-21:36
Thank you, when we will come I certainly would like to meet you. Your English is perfect. The only Sally I remember is Sally Stern whose wife was a Freudenberger, Her mother; I think her name was Rikah was my god mother. I never heard from the Freudenberger’s or the Sterns, after we left New York in 1950. I do remember a Max Hecht who lived in Florida. I understand he passed away. Allan Hecht married Sheri Rosenberg in 1965, we have 3 children, Michele who married Andrew Targovnik, They have 2 daughters Amanda and Casey…we will be going to Amanda’s Bat Mitzvah on 12/11/ 04, Robert who married Elisa Davis has 2 daughters Jenna and Carly, Gayle who married Bruce Lander has 3 children Brian,Jessica and Rachel. As you see that will be the end of the Hechts from me. Justin Hecht had 1 daughter. Inga who was married to Lothar Arnoldi. They had 1 son named Michael. I hope this will help.

30.11.2004-02:12
The history of the Hechts. I will get you the dates of my family. I don’t think it is necessary for you to send a gift to Amanda. THANK YOU for your good wishes. It is so nice that I have family in Israel. I feel cheated that I have never heard about you. I thank you for getting in touch with me.

Babetta Sichel (ithink that is the spelling) She was the sister of my grandfather Max Hecht. She was also in Tereizinstadt but she survived. She had a daughter named Elsie. She married Fred Openheimer. He became a cattle dealer some where in N.Y.State. They both passed away. They had a daughter named Evelyn. I lost touch with them some 30 years ago. Solly and Molly Stern nee Freudenberger took care of Molly’s mother Ricka. That is a whole family that I never knew. I just remembered when I was a kid my father went to there house to blow shofer for Rikah as she was to old to go to schule. I don’t know if any of this information is valuable to you.

4.12.2004 -01:17
Cedric & Vreni Levy lives in Jerusalem. They have 3 daughters. All married. Esther and Ephraim have 6 (or 7) children and are involved with Aish Torah. Michelle and her husband (I believe he is an agriculturist) use to live on a Kibbutz in Rosh Pina, I don’t know where they are now. Sari and her husband just had their first child. They are a wonderful family. Cedric originally lived in England…but that was many years ago.

7.12.2004
Today being the first night of Chanukah, we hope that this light will bring peace to you and your family, as well Chol Israel. As we will be in NY this weekend, have a good shabbos and a great coming week.

11.12.200416:56-
It is funny, but the Rabbi where my grand daughter is being Bat Mitzvah’s name is Rabbi Hecht. His grand parents came from Germany. He wants to see our family tree he may be another relative.

22.12.200400:38-
I just received the disc. I must say I didn’t know I had so many relatives. It seems that your children are about the same as mine. I am SOOOOOOOOOOOOO glad that I met you. And Thank you so much. I will be in contact with you. Thank you again.
04.01.2005 – 20:41
I am writing this to you Susan and to Yacov Hecht. Yacov has done a genealogy search of the Hecht family. He has gone back to the mid 1700s. I know the Groedels fit in here some where. Can you correspond with Yacov, who by the way resides in Israel, To see how we all fit together? Yacov, Susan’s grandfather sent visa’s so that my father could get out of Germany in 1938.

As you can see, I received your message. I’m on vacation and do not have access to any family history. My grandparents and parents, all of whom are deceased, never discussed the relationship with me so I don’t know very much. When I return from my vacation, I’ll look for anything that might be written. I’ll e-mail you again in 2 or 3 weeks and let you know how I’m doing.

07.01.200519:49-
I saw Sally Hecht from Maroldsweisach.Is that your father? I don’t know why none of these names were ever mentioned to me by my father.

07.01.2005-20:00-Did he do anything with Max Hecht? I was in Maroldsweisach. Saw the cemetery, the burgermeister took us around and showed us the “Jewish homes”. The house where my father lived is still there. They even have a postcard with my father on a motorcycle in front of the house.

29.01.2005-15:37-
On Auschwitz anniversary, Holocaust survivors reflect .This is good yet quite sad. Did your father immigrate to Israel before the war?