The “Adass Jisroel” congregation has been for Samuel Hecht’s a setting that provided support and a sense of belonging, and with which he identified throughout his life. A detailed description of the nature of the Adass Jisroel congregation is therefore in order. The congregation was established in Frankfurt and followed the orthodox tradition. Rabbi S. R. Hirsch was the spiritual father of the “Adass Jisroel” congregation. Rabbi Dr. Azriel Hildesheimer was the founder of the Berlin congregation. He was born in Halberstadt, and came from Saxony, Prussia. He was appointed as Rabbi of the congregation. He arrived in Berlin in the autumn of 1869 with a group of yeshiva students from Eisenstadt, Hungary. In Berlin he attempted to establish a religious school for boys and girls. In 1873 the “Rabbinical Seminary for Orthodox Jewry” was established.

Among those who studied there was Dr. Hoffman, who was often mentioned by Samuel Hecht. The seminary became a center for religious Jewry, especially after Berlin had been recognized as the capital of Germany. The candidates who applied to the Seminary were expected to possess a high school diploma, as well as a high degree of mastery of the Halacha sources. A certificate of ordination was awarded at the end six years of study. In the Orthodox community, Semichah as a rabbi’ is granted in two forms: “Yoreh Yoreh” to instruct, and “Yadin Yadin” to judge.

This certificate was awarded only to the talented and to those who excelled in their studies, while the others received a special diploma authorizing them to be religion instructors (Akademischer Religions Lehrer). Grandfather was never officially ordained, but he lived the life of a preacher and religious instructor, and took care to recite the Halacha , (“Kitzur Shulchan Aruch”, Basic Jewish Laws and Jewish Customs) daily. 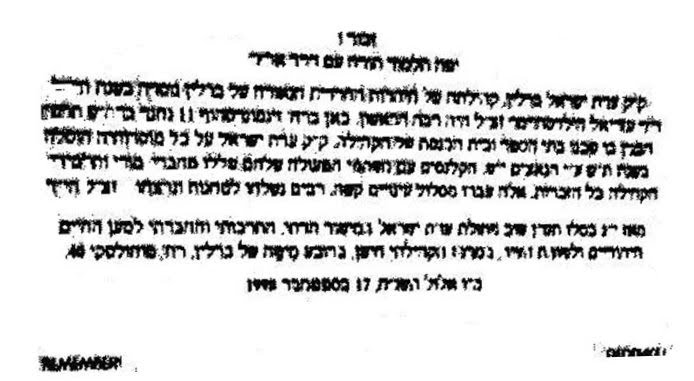 The First World War have brought the Ashkenazi orthodox Jews and the East European Jews were closer together. In 1925 172,000 Jews lived in Berlin.

Hildesheimer, leader of the congregation, followed by Rabbi Munk, remained in Contact with world Jewry. During the First World War and afterwards, Hildesheimer opened day schools for children and for teenagers. After the first war, the orthodox attitude towards Zionism, Eretz Israel and towards Hebrew as a living language has become more moderate. The last rabbi who taught in a rabbinical seminary was Azriel Hildesheimer, son of Meir and grandson of the founder.

In 1933 160,000 Jews still lived in Berlin, but their numbers began to dwindle. As the Second World War drew to a close only 75,000 have remained. All activity in the rabbinical seminary has stopped in Nov 10, 1938, 60 years after it was established. The year the “Final solution” was implemented, when most the German Jewry’s institutions and synagogues were burned down, or demolished, was the year Samuel Hecht (fifth generation descendant of the Hecht family) and his family made Eliyahu to Eretz Israel. The memorial monument of the Adass Jisroel congregation located at the corner of Schleswiger Ufer and Sigmuds Hof, Berlin. (The photo was taken in the course of the family heritage journey in Berlin in 2004. Matanya, Yacov, Yoel, Yael, Lyran and Asaf took part in this journey).